The absolute and relative configurations of 1-epialexine are established by X-ray crystallographic analysis, giving (1S,2R,3R,7S,7aS)-1,2,7-trihydroxy-3-(hydroxymethyl)pyrrolizidine. The compound crystallizes as the hemihydrate C8H15NO4·0.5H2O, with hydrogen bonds holding the water molecule in a hydrophilic pocket between epialexine bilayers. In addition, a comparison was made between results obtained from examination of the Bijvoet pairs from data sets collected using molybdenum and copper radiation.

3 alpha,12 alpha-Dihydroxy-5 beta-cholan-24-oic acid (deoxycholic acid DCA) is able to discriminate between the R- and S-enantiomers of camphorquinone and endo-(+)-3-bromocamphor and select only the S-enantiomers from a racemic mixture. DCA forms novel well ordered 1:l adducts with (1S)-(+)-camphorquinone and (1S)-endo-(-)-3-bromocamphor, both of which have been characterized by single crystal X-ray diffraction (SXRD). When DCA is cocrystallized with (RS)-camphorquinone and (RS)-endo-3-bromocamphor, 1:1 adducts of the S-enantiomers are produced together with crystals of the free racemic guest. In contrast, in the absence of (1S)-(+)-camphorquinone, DCA forms a 2:1 adduct with (1R)-(-)-camphorquinone. In this 2:1 adduct the guest is disordered at ambient temperature and undergoes a phase change in the region 160-130 K similar to that observed for the ferrocene adduct, but with only partial ordering of the guest. The SXRD structure of the low temperature form and the variable temperature C-13 CP/MAS NMR are reported. Cocrystallizing DCA with (1R)-endo-(+)-3-bromocamphor gives the free guest and a glassy solid. 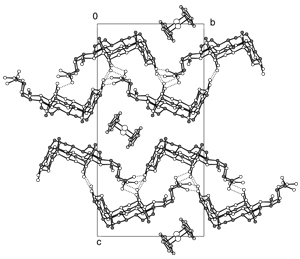 Packing diagram of (deoxycholic acid)2:ferrocene at 100K viewed along the crystallographic a-axis; hydrogen bonds are represented by dotted lines

Most modern small-molecule refinement programs are based on similar algorithms. Details of these methods are scattered through the literature, sometimes in books that are no longer in print and usually in mathematical detail that makes them unattractive to nonprogrammers. This paper aims to discuss these well established algorithms in nonmathematical language, with the intention of enabling crystallographers to use their favourite programs effectively.

Librational motion within a crystal structure distorts the measured bond distances and angles from their physical values. TLS analysis of a rigid molecule or a rigid part of a molecule allows the calculation of bond-length and angle corrections. Until now, no estimate of the error on these corrections has been available. A method is presented for propagating the errors on the anisotropic displacement parameters (ADPs) to the bond-length and angle corrections which are a function of the libration tensor. The numerical significance of approximations made during the calculation is discussed.

The Annual Meeting of the British Crystallography Association was held in York.  Contributions from Chem. Cryst. included:

Ibby completed a D.Phil. in Chem. Cryst. in 2002 working on clathrates of deoxycholic acid.  He now works in Malaysia where he is the proud owner of a new diffractometer and visits Oxford when he can.